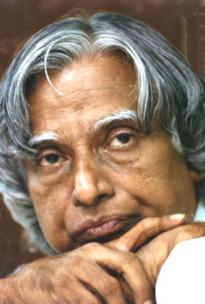 I read Kalam's book "2020" back in early 2000, and have keenly followed his lectures and writings ever since. The book is dedicated to a young girl whom Kalam met and asked as "what is your dream" for which the young girl replied "I want to live in a developed India".

Kalam, whose term as president ended this July has announced that he is going to teach at PSG College of Technology as a visiting professor. As you may have guessed by now, PSG Tech is my alma mater where I got my B.S. from, and I was quite thrilled to hear this since I'm sure Kalam will be a hit with students.

To me at least, Kalam has been our greatest president ever, and a strong source of inspiration.

“I will take three to four classes this year, for about 60 students each.

The subjects that I will concentrate on are mostly nano-science, nano-technology and also the influence of society in knowledge areas,’’ he announced here on Saturday.

He wanted the undergraduate, post-graduate and the Ph.D students of PSG to take up the study of the implementation of Providing Urban Amenities in Rural Areas (PURA) as a business proposition in the different areas around Coimbatore and added that there was already one Sakthi PURA in Pollachi.

Only education and women’s empowerment would help the ranking of the country in the Global Competitiveness Report wherein India figured at the 43rd position.
(Full article here)