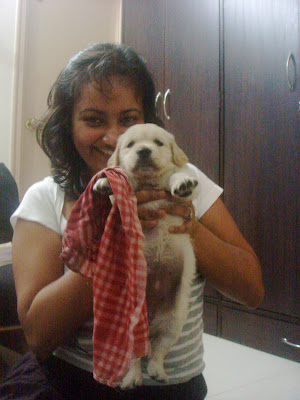 We have a new addition - my gift to Monami for her birthday! A golden retriever puppy! Although her birthday was early May, we didnt get around to pup hunting until two weeks back since I had been out of the country travelling over weekends. We were initially keen on adopting a stray or orphaned pup, giving it the shots it needs and raising it with us, but after giving it much thought, we decided to consider that for a second pup someday once we had experience raising one.

When my parents visited the last weekend of May, we went over to the Lasrado's, a breeder recommended to us by the Mysore Kennel Club. Monami was initially torn between picking a German Shepherd and a Golden Retriever, but once she saw the goldies, she had made up her mind. :-)

Of the two little furballs on her lap, Ma Belle is the one on her left. The pups were only 25 days old though, and so we had to return the next week so that the breeder could finish a litter inspection and ensure the pups were ready for adoption. Sheer coincidence - the puppy was born on May 4th, just a few days before Monami's birthday.

When we returned a week later, the pups looked like they had doubled in size! Ma Belle is the plump little one on Monami's lap, still sniffing around with quiet confidence. The smallest of the litter, she was creamy white with golden brown ears and streaks of gold down her back. The little darling with floppy ears and cutie pie face took to Monami rightaway.

Here's a cute picture of us with Ma Belle's dad before we left the Lasrado's. He was a handsome, friendly and intelligent dog, and came by to sniff around and play for a bit. Ma Belle watched on quietly from Monami's arms without a whimper while we carried her away to her new life. Incidentally, this was the same evening as the French Open final (Nadal/Federer), but I dont think I've recovered from that enough to blog about it quite yet.

But why 'Ma Belle', you may wonder? It's a play on Monami's 'firang' name (Mon Ami is 'my friend' in French, and Ma Belle is 'my beautiful'). And of course, Monami and Mabelle are two (words) that go together well (Thanks Paul). We considered a number of other names though and didnt jump to this one right away: Totoro (Japanese anime), Momo (Tibetan dumpling), Remy (Cognac/Ratatouille), Milou (Tintin's snowy white dog), Pazu (Japanese anime), Simba (Lion King) and scores of others. But Ma Belle felt the best, and she has responded to her name quickly!

Monami and I have adjusted our work schedules around the 4 feeds a day she needs - Monami leaves early and comes back early, and I leave late and work late. This isnt too bad, since this aligns pretty well with our work hours and calls. In a few months, we'll be able to cut back to 2-3 feeds a day.

She has made herself at home quickly, lapping up bowls of Cerelac and weaning food, playing with some of Monami's old stuffed toys, pooping around everywhere, nibbling at anything she can get her jaws on and sleeping 18 hours a day. What a sweetheart!