It's been a whirlwind few months, and I've mostly been staying in touch with friends through Facebook and Twitter havent quite done a good job of staying loyal to my blog. It's inevitable - shorter, quicker updates through social networks are here to stay! But here's a quick round up of what's been going on, just in case you missed it.

1) French Classes: Monami and I joined a French class at Alliance Française a few months back. It's been good fun since we've got a very diverse class, and learning a new language opens your mind at several fundamental levels. We've finished the first 3-month course and are on to the next 3-month level. Right now, we're finally getting fairly good at present tense, and are getting the hang of past and future. So, our spoken French is still mostly - I eat. I listen. You eat. We shopped. You get the idea. But we're learning fast, and French is certainly nowhere near as difficult as is you may think it is. Or as high brow either. As for us, while this has been a lot of fun, we are most likely going to stop with the level and do something outside of a classroom next!

2) Food Blog: I've done a few reviews on my food blog in the last few months, but it's been even more fun making quick updates on twitter. Follow us (foodinbangalore). We're now the No. 1 food blog in Bangalore based on Google's Page Rank, and what's what funny was I've been hearing this from the PR agencies who invite me for reviews. 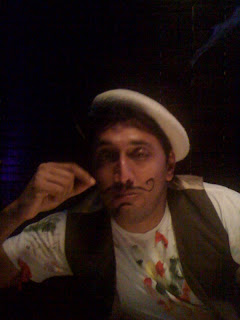 3) Halloween: I did a Salvador Dali-esque painter with a beret and moosh, and Monami was a mime. We hung out at HRC with Mioara and other friends and had a good time.
4) Chennai Visit: I had a good time visiting Chennai over a month back, and caught up my parents. We also visited the house at North Mada Street, Mylapore where my dad grew up. Incidentally, my dad (who is now 67) continues to get involved in new ventures. In addition to his work as a part of the Ford Foundation funded national security think tank CSA, he's also now teaching journalism students at Asian College of Journalism. He's enjoying his teaching stint so far and enjoys sharing his vast experience with others. In other news, my alma D.A.V. high school principal Satish had to resign under mysterious circumstances. And no, despite some inside sources, I don't know what happened. I studied there during the Ram Kalia heydays, and can only believe that the school will continue to change and evolve over time, for the better.
5) Birthday: Monami and I threw a fun BBQ party at our place, and everyone had a blast dancing away on the terrace late into the night. But my highlight of the week was the time I spent through most of that week helping ImagineIndia with collections for the flood victims in northern Karnataka. I ran a drive with our neighborhood to pull together old clothes, books, medicines and donations, and was moved by the huge response. I'm hoping to start to get involved with a school in the neighborhood and am trying to work out areas where I can contribute with social work.
6) Levitum: A few friends and I have launched a startup focused on building 'cloud' based services for mobile devices that connect them with social media. Our name is inspired by the Latin word from which 'levitation' comes from. Sounds cool? Yeah, we thought so as well! We're working on a couple of very exciting ideas, and it's been a lot of hard work in the last few months. We hope to get our first product in private alpha by early 2010 and will start to send out invites to friends & family to check it out ;-) Since we are privately funded, we are bootstrapping ourselves through services engagements, and have a few really cool projects on the iPhone, Android and Nokia smartphones currently in progress. Check our our site www.levitum.com and follow us on twitter: levitum
7) Home Media Center: We set up an awesome home media center using our Mac Mini running Boxee and hooked to our Samsung HDTV. I love how Boxee automatically pulls IMDB data for my entire 2TB external drive movie and music collection, displaying the movie covers, synopsis and subtitles as well. And an iPod touch running the Boxee app is our remote control. 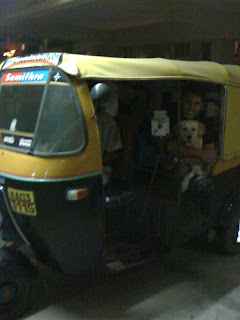 8) December Vacation: We'd initially planned on visiting the Angkor Wat in Cambodia, but apparently it's pretty crowded at this time and it's best to go in Feb-March. We're instead taking Ma Belle and driving down to Chennai and then over to Pondicherry for a week!
9) Twitter: The net has become such a gutter, and in desi style, I'm a happy litterbug. Follow me on twitter, and you might catch some insights: twitortat
10) Misc: I was contacted by my alma Iowa State University for a feature in their alumni newsletter as a young achiever. It's an honor, and I'll be sure to post a link when it comes out. Ma Belle has been a sweetheart, and comes with us just about everywhere we go these days (including auto rides!) since she is so docile and obedient. Here's a bunch of videos of U.S. soldiers returning from Afghanistan being welcomed by their dogs. Warning: if you are on the fence about liking dogs, these videos will make you want one of your own.