Crazy to think Federer can win 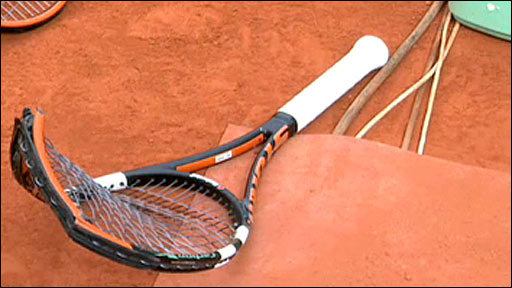 Extracted from Peter Bodo's insightful post on the eve of the Federer-Nadal French Open Final.

On Sunday, the same two men clash for a Grand Slam title for the third consecutive year for just the second time in the Open era -- the other occasion being the three straight Wimbledon finals fought out by Stefan Edberg and Boris Becker.
But the great -- and improbable -- thing about the incipient Roland Garros final between Roger Federer and Rafal Nadal is not how similar it is to the rivalry Becker and Edberg had at Wimbledon, but how different. For one thing, Federer and Nadal have been Nos. 1 and 2 in the world, respectively, for all three of these meetings. And that's unprecedented.
For another, Becker and Edberg were both attacking players with similar styles, playing on the surface best suited to that game plan. While Nadal, once again seeded No. 2 here, probably represents the ultimate clay-court expert, Federer is more effective on faster courts. That this is a battle between a paragon of surface-specific tennis (the specialist Nadal) and the master of the all-court game (the generalist) is a fabulous bonus.
In fact, Federer's status as the second-best player on clay -- he has reached a semi and three finals in the last four years in Paris -- represents an extraordinary achievement. The annals of tennis history are choc-a-bloc with Wimbledon champions who labored like Hercules to reach one Roland Garros final (John McEnroe, Stefan Edberg, Michael Stich) and others (Pete Sampras, Richard Krajicek, Goran Ivanisevic, Becker) were lucky to paste the rare, one-time semi or quarterfinal finish.

The downside, of course, is it was always Nadal opposite Federer on final's day. Roland Garros and the Australian Open are the two majors that have produced the highest number of different champions (24). In the case of the red dirt major, it's because the clay surface is a great leveler on which it's impossible to grease out matches with a big serve or other weapon. All the runs you score -- or give up -- at the French Open are earned.
So what does all this bode for tomorrow? Bad news for Federer. Let's face it, Novak Djokovic may be threatening to disrupt the pecking order near the top. Nadal's history of injury, coupled with Federer's slightly substandard results earlier this year, are convenient rationalizations for someone thinking this year somehow could be different. But the on-the-ground reality emerging these past 10 days in Paris is that nothing has changed. One common definition of insanity is doing the same thing over and over and expecting a different result. It sure looks like the dudes here have been doing the same thing over -- and over.
Nadal is clearly playing terrific tennis -- he's caught a second wind after grumbling and complaining about the brutality of the schedule a few weeks ago. Federer has been slightly more up-and-down, but he'll have the counsel of a new coach (Jose Higueras, a clay-court master) to rely on. Tip: Look for Federer to attempt using his backhand as more of a weapon (if he can) -- especially the tough but potentially rewarding big backhand down the line. Look for Nadal to try to pin Federer into the backhand corner, taking away that shot.
It's amazing how the No. 1 player and candidate for GOAT (Greatest of All Time) can go into a Grand Slam final as an enormous underdog, but that's the case here. You have to be nuts to think that Federer can't win, but you have to be downright crazy to think he will win.