I will go to Morocco someday. I just dont know when.

I cant quite describe what mysterious forces seem to draw me there. Stories of Casablanca and the famous Mediterranean beaches. The legendary street food. Sepia tinted images of tea cups and swirls of smoke from a hookah. And the Fes Festival of Sacred Music.

It likely is the Fireflies festival. Over the last couple of years, I've been fortunate to have caught the 2006 and 2007 dusk to dawn Fireflies Festival of Music hosted near Bangalore in Kaggalipura village, where Baul, Qawwali, Hindustani, Carnatic and Folk singers from across India perform in an open air natural amphitheater under a banyan tree. 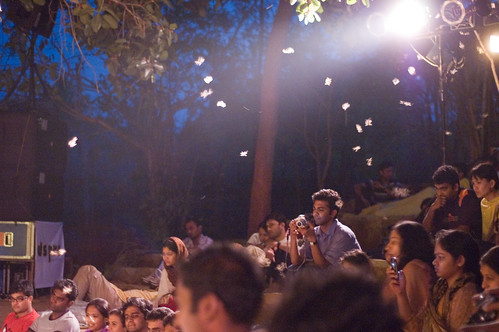 (Picture above: Courtesy Jace, Fireflies 2007. See if you can spot two familiar faces!)

This year, the festival which was previously held in April is happening today (Feb 23rd) night. Unfortunately, I am several thousand miles away in Brussels and cant make it this year, and I cant quite describe how much I'll miss being there.

The nostalgia that draws me like a moth to a flame, whipping up a flurry of emotions when I remember Oikyotaan's performance (see YouTube video below)

Fireflies organizers - why did you have to move it from April to Feb!!

While we are on the topic of Morocco, here are a few blog posts about the 2007 festival in Fes:

And here's the website of the 2007 festival itself. The site for the 2008 festival does not seem to be fully up yet, but I found a program brochure which lists performers from Norway, India, Greece, Lebanon, France, Mali, Senegal, Vietnam and several other countries.

Well, the festival is from June 6th-14th this year and since we've already done our share of traveling this year, its more likely I'll end up at Opus, Bangalore than Fes, Morocco. But I will make it out to Morocco. Someday. Until then, I'll just need to wait until next year's Fireflies festival in Bangalore.