It's December, and the tennis season for 2007 is pretty much over. As you know, the season runs Jan-Nov every year. Although some critics feel it would be good to shorten it, I dont quite agree since I feel tennis is different from other sports in terms of its global nature and the conditions of play. I do however agree that players need help in balancing their schedules and commitments so that they dont burn out.

R (Interviewer): The French Open continues to elude you. One imagines that the next time that you play you will probably be up against Rafael Nadal again. Does that mean it's never gonna happen for you do you think?
Federer: No, I disagree. Actually this year's been some sort of a breakthrough year in some ways. You might not understand why because of me being at the top for so long but I won the Australian Open this year for the first time without losing a set in the Grand Slam which was a great start to the season then I've beaten Rafael Nadal for the first time on clay in Hamburg just prior to the French Open which was a big breakthrough for me so I've beaten him now on all surfaces so that gives me great hopes for next year and this is why I will always believe and I'm sure I can do it, winning the French, also if I have to go through Rafael, then it's not always the case, the draws change all the time.

It's insightful to look at it from that perspective - that Federer sees this as having been sort of a 'breakthrough year' in his having been able to dominate Slams without losing a set and having been able to beat Nadal on clay. To me, this was perhaps the year where although Federer won 3 of the Slams, his authority has been the most challenged. Nadal has made a point - he can win on grass. And Novak "Nole" Djokovic has emerged as one of the most exciting new players, who has a lot to learnt, but has a winner in him. Was Federer downplaying his fears? Has he already 'peaked'? 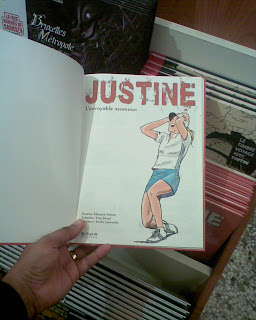 Here's another interesting tid-bit - while Monami and I were at the Comic Art museum in Brussels, I noticed this Dutch language comic on Justine Henin! Belgians are proud of their star player, and it shows. BTW, check out these pics of Justine with Sinter Klaas yesterday.

If I had been in India last month, I would have given an arm and a leg and have made the trip to Kuala Lumpur to watch Sampras and Federer play!! In case you havent, check out their 2001 game together.

Sigh. I cant wait for the 2008 tennis season to start!