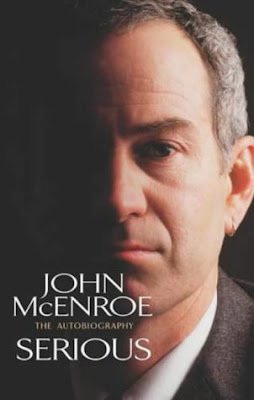 I recently finished reading John ("Johnny Mac") McEnroe's autobiography, very aptly titled "Serious", a reference to his well known "You cannot be serious" jibe at a chair umpire during the 1981 Wimbledon.

It's written in McEnroe style - its honest and straightforward, saying things as it is. It takes you through the childhood pressures he faced and the highs and lows of growing up, and how he thrived on his emotional outbursts to goad himself on. He is remarkably self-critical, providing several insights into his eccentricities and failings, while still being anything but modest about his well known achievements. At times, some of the incidents he describes, like how he once threw a racket into a stand and it hit a kid are gruesome, but then - you can count on Mac to not sugarcoat things.

He writes at length about his famous encounters with Borg, Connors and Lendl - the famous five-setter with Borg at Wimbledon, the infamous loss to Lendl in the French Open final after being 2 sets up, on and off court squabbles with Connors, drug-induced experiments, and his pride in playing for his country in the Davis Cup. He offers insights into the psyche of a top player with an stressful life on the road - what do you do when you get back to family, and how do you switch off and on the intensity?

The latter part of the book focuses on his divorce with Tatum, marriage later to Patty Smith, the singer, and how kids have changed his perspective on life. At the end of it all, a few words probably sum him up. Driven. Angry. Genius. Honest. Edgy. Passionate. Human.

I read the book while watching through the second week of the French Open, which ended with Nadal displaying another superlative performance to thwart Federer's bid. In my heart, I was secretly wishing that Federer would win the French, and that Nadal would win Wimbledon this year, adding another interesting twist to the tale. The game and tennis lovers have so much to gain from the ongoing rivalry.

As some of you know, I havent had a home PC for a while since I've been working primarily off my work laptop. After much deliberation - probably about a year in fact, I went out and bought one. First, I have to tell you that I'd been eyeing the Mac Mini ever since Apple came out with their Intel based series which could dual-boot to Windows. After much analysis paralysis of options between buying an assembled PC, a branded PC and several trips to the Mac store at Forum Mall, I made the leap!

And what can I say - I've just been completely blown away by the whole experience. The only other Apple product I've ever owned was an AirportExpress Wi-Fi router, which was very handy while travelling, and I've always had the image of a marketing-savvy high priced over-stylish company with high maintenance add-ons to fund their large R&D budget. I'm happy to say that I was wrong, at least on a few counts. It started with my shopping experience, where walking out of the store with the Mac Mini was like carrying out a 'tiffin box' to the setup at home which was super smooth. The Mac hardly looks like a PC. It's more like a consumer electronic device. My objective is primarily home use - hooking up cameras, miniDV and music while using it to surf and email. I've been able to organize my pictures, make movies with ease, use the remote control provided to listen to music and watch videos effortlessly. Monami found a neat software called ComicLife which she plans to use to draw, then upload and insert strips to create graphic storyboards. Little things like the Expose feature, which initially seems like just a neat trick, but upon use turns out to be an intuitive way of handling multiple windows makes you wonder why Windows doesn't work that way. Have I tried to set up Windows Bootcamp or tinker with the BSD underlying system? Not really. For now, I'm just happy immersing myself in Macworld.