It's that time of the year again - the annual Fireflies 'dusk to dawn' festival of music is back, and after rumors doing the rounds, I finally heard confirmation about the fest on Friday night. Last years Fireflies festival had been absolutely fabulous (read my post dated April 2006), and this years line up of performers was just as stellar. 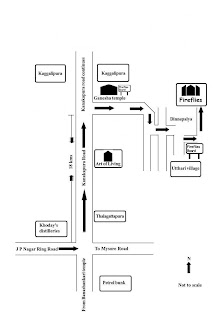 The all night long festival is held at the Kaggalipura village, which is about 20 km from Bangalore (see route map for details).

For the sleepover, Monami and I packed a mat, pillows, food, sheets, and an umbrella. The forecast had said there were 70% chances of rain, but fortunately, the weather held out.

The directions provided were good, and it's a straightforward drive down Kannakapura Road past various temples that had pujas (for the lunar new year and harvest festivals) and Art of Living. Somehow, we missed the Ganesha temple and the prominent sign for Fireflies and had to turn back after we had gone too far.

The first performance we saw was the Tala Vadya, from the Karnataka College of Percussion. Their ensemble included the mridangam, ghatam, dholak, drum pad, and the tabla. They were quite impressive although the richness of the tabla drowned out the other instruments.

During the break after this performance, a few announcements were made which hinted at possible future synergies between Bangalore Habba and Fireflies, as well as with the Alliance Francaise, whose director Eric is a regular here. I'm a bit divided on how I feel on further commercialization of an event like this, since it can dilute the focus and novelty, but I'll hope it'll help drive similar breakaway gatherings. 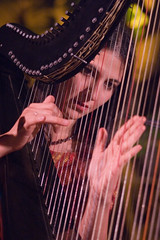 Next was an interesting performance by Clio Karabelia, a visiting half-Greek/half-French harpist with a supporting sitar and tabla. Unfortunately, she had various problems with the mikes, and the sound of the tabla/sitar all but drowned out the harp. I hope she'll be back, perhaps for a harp solo.

Dr Thomas Chandy and his group of eight senior citizen musicians - the Jazz Revival performed next, and were just as good as they were the last year. Dom Saldhana, their ageing sax player, who met Dr Chandy when he had come to Hosmat hospital to get his knee fused was their blue-eyed old boy, winning the audiences hearts. 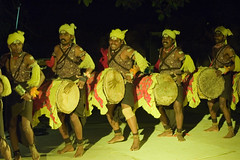 After all that jazz came a high energy show from Dollu Kunitha, Karnataka's very own group of rising star drummers. The finished by walking up through the crowds and then continued drumming near the stalls behind for what seemed like the longest time.

Oikyotaan!!! The group that everyone had been waiting for, and it around 1AM, they took stage. And for the next two hours, the audience was treated to a splendid variety of Baul and Fakir music. Bonnie, their lead singer has tremendous stage presence and an amazing voice. With the assitance of Karthik, their Baul singer and other contemporary artists, they have a sound unlike any other group out there. Having heard them now for the second year running, I'm fairly certain we will look back someday and say, 'We were there - we heard them back then!'. The finished to a standing ovation, and the CDs they had for sale were quickly lapped up.

Like last year, they were followed by a Qawalli group, this time Shafiq Pervez and group from Nagpur. They were interactive with the audience and were splendid playing favorites like 'Dum Mast Kalander' and 'Purdah hain'.

The next performance was a sarcastic Serbian guitarist, who played a few traditional Serb songs before launching into a self-indulgent jam with the accompanying drummer. When he finally finishes, the sun is already rising and the next ensemble's nature themed jungle beats rouse the audience. If the organizers had chosen to keep this spot a bit tighter, its possible that they might have finished by day break as initially planned. 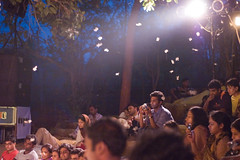 The morning raga parameshwari, the final signature piece and wake up call from sitarist Hindol Deb built up tempo gradually over time. The artist was seemingly annoyed that he was permitted to play only at around 7AM, and that there were noisy disturbances with the sound systems being removed during his poignant performance.

As we left in the morning, looking at the garbage strewn all around, we wondered if the message of social responsibility, one of the themes of the event this year was being heard. Is further commercialization of the event really the answer? I'd love to know what other people think.

Overall, Fireflies is easily the most entertaining annual event in Bangalore today. The wonderful vista of talented artists, the near magical ambience and the lively and appreciative audience make for a memorable night. And oh, at the risk of repeating myself. Oikyotaan. Oikyotaan. Oikyotaan. They have a sound like no other. Hear them live.