The year is 2001, and the quarter finals of Wimbledon has just ended. Roger Federer has dethroned the reigning champion Pete Sampras 7-6, 5-7, 6-4, 6-7, 7-5. Sampras had won seven out of the previous eight Wimbledons. 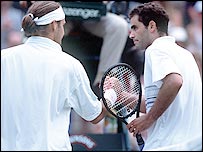 The morning headlines read, "Swiss teen Federer ends Sampras' Wimbledon run". Sampras was deprived of an eighth title, and his attempt at a fifth consequitive Wimbledons.

I found a beautifully compiled video of the highlights of the game on YouTube. While by no means can this game be extrapolated to compare the great players since Sampras was nearing the end of his career, and Federer was just starting off, this is a video clip to watch just for the sheet beauty of their games. Some of the points are so unbelievable, I had to rewind and watch it a few times.

So, who is the greatest ever?