Travelling again, but this time on work, I was in Brussels during the last week of July. Although I’ve been to Europe a few times before, I had never gotten around to visiting the picturesque Belgian capital and it was nice to get around and see things. We stayed at a Marriott in the heart of the city. Now, how American does that get? Almost like a cliche, there was a McDonalds right next door. On the other hand, the hotel was a stones throw from the central Grand Place, the cultural hub of the city with a lot of cafes, pubs and chocolate shops all around.

Here's a picture of the Grand Place at night, when they have a sound and light show. Crowds gather in summer and laze around in the middle of the beautiful plaza, watching the splendid display. 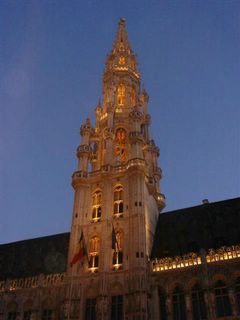 Like in many other European cities, there's a statue which people rub and make a wish as they pass by for good luck. That's Jeff Jarvis, Jeff Wilhelm, Craig and I rubbing the reclining bronze figure. Oh, all of us except JeffJ. 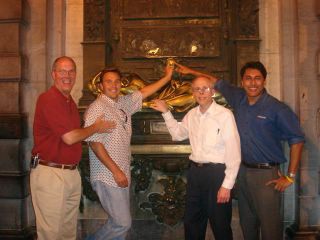 Every street in the city center seems to have a cafe, a pub and a chocolate shop. Why chocolate shops? Belgium is home to some of the best chocolate manufactures in the world. I came back to work with over a kilogram of Leonidas chocolates all of which disappeared in minutes! I also brought back some Neuhaus and Côte d'Or. Here's a picture of a little chocolate shop which had 'tennis chocolates'! Yes, I bought some of those too. :) 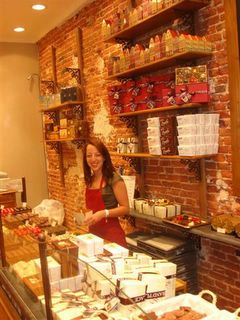 My cab ride from the airport to the hotel was quite interesting. My cabbie was Schumacher, or at least he sure drove like him, weaving like a maniac through the dense traffic at 160kmph. Since I enjoy thrills, I cant complain since it was a fun joyride and felt like being with a Delhi taxiwalla. While I was all belted up in the back, Schumi was quite comfortable, one hand on the wheel and a cigarette in the other, snaking his way through while his seatbelt dangled on the side. Locals later told me that cab drivers arent required to wear belts since its the middle of the summer and it can get uncomfortable since they are driving in the heat all day long. Now, driving all day long would seem to be a good reason to belt up since it increases the chance of an accident. But then, I'm sure they know better.