I got a tattoo too

On the last day of our trip to Brussels, I and my colleagues visiting from the States made a trip down to the nearby town of Ghent where a large festival called Gentse Feesten was organized for their national day. There were several live music concerts happening at the same time - reggae, latin, rock and beer festivals along the way. Ghent is a pretty city with a medieval past, and retains the old world charm with little canals, old forts, and churches with spires. In particular, the tall belfry and the Gravensteen castle were noteworthy.

After a few hours of walking around, we chanced upon a henna (mehendi) tattoo parlor off the sidewalk. Quite promptly, we all decided to get tattoos. Jeff & Jeff got some lovely macho tattoos of a lizard and a bull, while Susan got a pretty little ornamental one on her back. 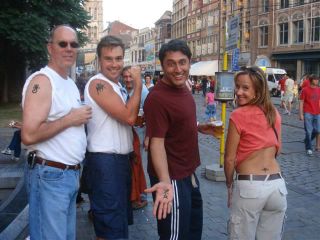 I was a wimp and simply got one on my palm, and so I was the Indian beggar walking around on the street with an open palm until the mehendi dried an hour later. I scribbled a little design of my own which the artist rendered beautifully. On top are two of my passions - tennis (racquet) and writing (yes, its just a pen), with a two button mouse connecting me to work (my company logo). 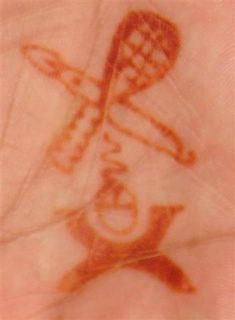 It lasted a week before fading slowly away.