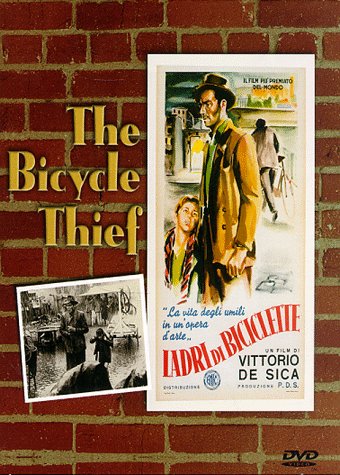 After what has felt like the longest time ever, I saw a good movie worth writing about. And what was special about this movie was amazingly enough, its simplicity.

Set in post WW-II Italy, the "Bicycle Thief" is a neorealistic film made in 1948 about a common man's deperate search for his stolen bike. His pusuit leads him through the dilapidated streets of poverty struck Rome.

The movie begins with a scene outside the unemployment office where our main protagonist signs up for a job sticking posters on city walls. His wife is forced to sell their bedsheets in order to buy the bicycle he needs to get around the city. While he is up on his ladder sticking up a Rita Hayworth poster, a passer-by steals his bicycle. And thus begins the chase.

Without giving out any spoliers, I just have to tell you that ultimately, the movie is about man and his dignity. The story in itself and its characters are timeless.

There are two excellent reviews online of the movie by Hoberman and Ebert. There's also an interesting analysis by Bonikowski of the political backdrop of the movie and its influence on the production.

*Potential spoiler* But what blew me away was when I read online that the Italian title "Ladri di biciclette" translated more appropriately to - "Bicycle Thieves". If you've seen the movie, you would appreciate the subtlety.