Last weekend, Aditya, Vengada, Ramesh and I made a trip to the Bheemeshwari fishing camp along the Cauvery river. The package was offered by the Jungle lodges resort, which is about 120 km from Bangalore (two hours away). 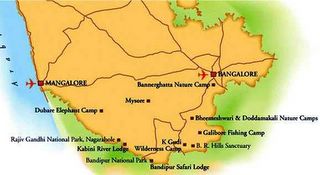 Jungle lodges offers two options for accommodation - tents or log cabins. We stayed in the tents, which were a bit warm since it was mid April, but spacious and well furnished.

After a quick lunch, we were taken on a short coracle ride across the river and back. The river itself is only about 100 feet wide near the camp, but is about 60 feet deep and has some treacherous whirlpools! Soon after we finished the ride, I ventured into the water for a swim and started to wade around. Suddenly, a few of the local villagers started shouting something in Kannada that I didn’t understand. I first thought they meant that the water was deep, but it was only after a few minutes that I saw that they were pointing at the other end of the river. As I squinted to look in that direction, I could see two bulbs just above the surface of the water about fifty feet away. At that point, it ceased to matter what the word for a croc was in Kannada, I just scrambled to get out of the water as soon as I could. Fortunately, our friend (whom we nicknamed Doob Doob, after the Tinkle comic character) seemed quite happy just bobbing up and down at the other end of the river.

We then went on to try fishing with the long line and maida bait used by the locals. The locals toss the rock hard maida deep into the river and then slowly pull the line in, hoping that while the little fish nibble at the maida, a larger fish would nab them, and we in turn would be quick enough to rope the big catch in. Funnily enough, I had dozens of little 10 paise coin sized guppies nibbling away at my toes while I was fishing, but couldnt catch anything. We might as well have had a better chance at tossing a rock at the watchful croc in the distance and knocking it out.

We walked further down the river, throwing flat bottomed stones like idyllic boy scouts. Aditya and Ramesh made six ripples each, with one of Ramesh's throws going almost across the river. The water was clear, the sand was soft, the pepples were round, and there were little crustacean sea shells by the sand.

Later that evening, we spent time by a campfire by the river and then playing scrabble in the tent as the night wore on. When we stepped outside the tent to fetch a wine bottle opener, we saw a few large deer gallop by our tent. The next day morning, we were woken by a monkey climbing up over the tent on its way up the tree. We quickly got ready and joined the trek organized up to the top of a nearby hill which offered a panoramic view of the river meandering around the camp.

On the way back from the trek, we drifted away from the pack to take the road less travelled up the river basin, cooling off at times with a dip in the water. We finally arrived at the elephant farm where Vengada and Ramesh took a majestic ride around the block on a large tusker. But as for me, I fell instantly in love with little Bheema, a naughty but friendly baby elephant that was running around, jostling with the mahouts. 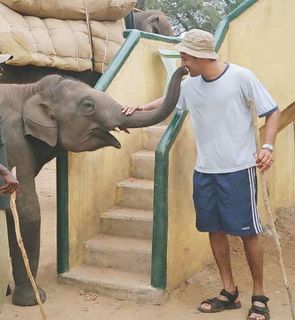 I was wondering - have any of you been to Bheemeshwari? What has your experience been? If you are planning on making a trip, what are your plans?