I’m Aravind ‘Arvi’ Krishnaswamy, and I’m an entrepreneur and tech executive. I live in Bangalore, India with my wife Monami and dog.

I’m passionate about all things cloud, mobile and social. I co-founded Levitum and am fortunate to work with a wonderful set of friends. Initially, as a young startup, we bootstrapped ourselves by offering high end architecture & design consulting. That’s helped us build out runway to now focus exclusively on our own products without having had to sell our soul to a VC. We’re building FunWithCharades (charades online), and Musiguru (a music learning app).

In the past, I lived and worked in Silicon Valley, where I was a part of one IPO and exit. I also hold a patent for work done during my M.S. research at Iowa State University.

In my spare time, I enjoy playing tennis, writing and travel with my talented wife and dog. I’m also a frequent public speaker at a number of product and tech conferences. This blog includes personal musings, and views expressed represent my opinions alone.

Why this site is called Arg0s

Some of my happiest moments every day are spent relaxing with my wife and lovely golden retriever. This site is registered with Mitsu as arg0s.in, and is a homage to Argos, the faithful dog of Ulysseus.

The story of Argos has different endings, depending on which source I’ve looked up. In some, it is believed that Ulysseus had to strangle his loyal dog to avoid his identity in disguise being given away. However, this is the story that I’d like to believe (source: Wikipedia)

As they were speaking, a dog that had been lying asleep raised his head and pricked up his ears. This was Argos, whom Odysseus had bred before setting out for Troy, but he had never had any enjoyment from him. In the old days he used to be taken out by the young men when they went hunting wild goats, or deer, or hares, but now that his master was gone he was lying neglected on the heaps of mule and cow dung that lay in front of the stable doors till the men should come and draw it away to manure the great close; and he was full of fleas. As soon as he saw Odysseus standing there, he dropped his ears and wagged his tail, but he could not get close up to his master. When Odysseus saw the dog on the other side of the yard, dashed a tear from his eyes without Eumaeus seeing it, and said: 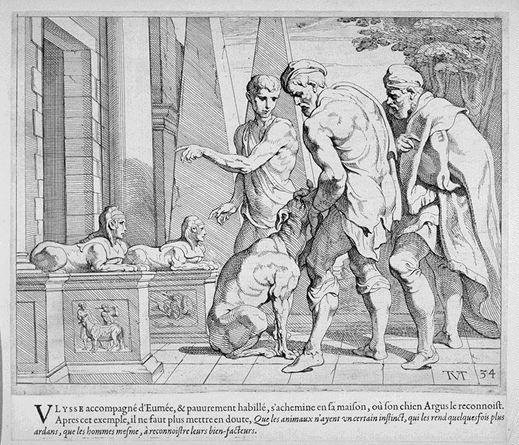 ‘Eumaeus, what a noble hound that is over yonder on the manure heap: his build is splendid; is he as fine a fellow as he looks, or is he only one of those dogs that come begging about a table, and are kept merely for show?’ ‘This dog,’ answered Eumaeus, ‘belonged to him who has died in a far country. If he were what he was when Odysseus left for Troy, he would soon show you what he could do. There was not a wild beast in the forest that could get away from him when he was once on its tracks. But now he has fallen on evil times, for his master is dead and gone, and the women take no care of him. Servants never do their work when their master’s hand is no longer over them, for Zeus takes half the goodness out of a man when he makes a slave of him.’ So saying he entered the well-built mansion, and made straight for the riotous pretenders in the hall. But Argos passed into the darkness of death, now that he had fulfilled his destiny of faith and seen his master once more after twenty years.