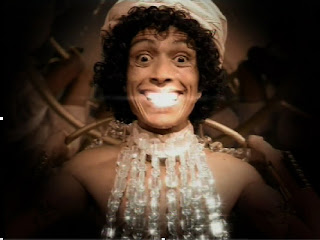 What an ad.
A glorious sunset. Eastman color hues. A good looking young villager on a bicycle crossing a bridge leading to what looks like a 18th century palace. Sufi music in the background. Palace guards in mallakhamb positions. A tennis court where the Rani is playing (badly). Nearby, the queen mother makes a big splash into the pool. The sleepy aging Raja ambling over to the large dinner table. The villager dashing across the palace grounds, over the wall and past the courtyard to join the human chandelier with just enough seconds to spare to pop a HappyDent chewing gum in and flash a brilliant illuminating smile.
The visual magic of McCann-Erickson and the Sufi-influenced score of Shantanu Moitra ("Tera dil roshan, tera man roshan") with its playful poke at the upper class snobbery of the pre-independence Zamindari system of made this ad an Orbit killer. To learn more about how the ad was made, check out the video (BTW, it also shows the ad at the start - in case you havent seen it yet).