Where did May go? 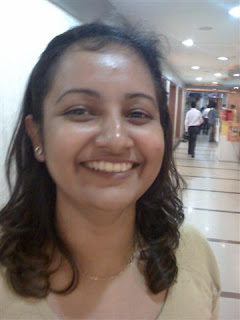 It's been a whirlwind month of May and I've been away doing quite a bit of travelling both on a personal front and on work.
I picked up a new MotorRazr V8. It's sleek, packs a load of features, provides good sound quality and battery life, and take great pictures (Here's the first one I took - although my hand shook a bit, Monami's pic has come out well).
I spent a week in Redwood City on a short visit to our company's California headquarters. For my friends in the Bay area - unfortunately, it was a pretty hectic visit, and I didnt have time to catch up. Our office hosted a lounge event where Strictly Ballroom was screened. 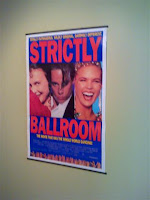 It looked like fun, and I hope to see it again sometime.

Soon after I got back to Bangalore, I met up with Chemba, my college batchmate. It was the first time we were catching up after several years.

The next day, I drove down with Vasim and Vatsa to Madhu's wedding in Anantapur, a city located in A.P. about 250km from Bangalore. It was great to be at the wedding, but it was a pretty hot day and a long drive back and forth. The good part was, it prepared me for my visit the next day to my in-law's place in Nagpur. When I arrived there, it was a warm welcome - toasty 47 degrees Celsius, and it felt like an open air sauna (Now compare that with Chennai, the open air hammam). I had a great time relaxing (indoors) with family, celebrating Monami's birthday and enjoying some fine Bengali cooking. 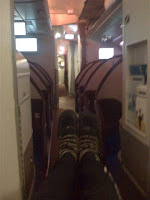 In the middle of all this travel, Monami and I have had little success in being regular to our gym, and the results shows in our midsection. I left soon after to fly to Canada to visit our Halifax, Nova Scotia office. I was fortunate to fly JetAirways via Brussels/Toronto although it made for a longer flight, since the service was fabulous and beats Lufthansa and most American airlines anyday. The icing on the cake? Our whole company files economy, even on long haul flights, and things get hard if you are in a middle seat between two big guys. But not this time! I arrived at the airport early and got a front row aisle seat in economy. Apparently, their planes are slightly differently shaped from other carriers, and the front row aisle actually faces the aisle leading into first class. As you can tell from my outstretched legs, I had ample leg room. Bliss. 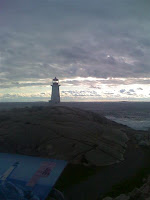 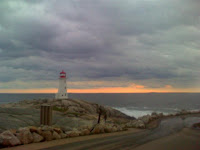 Halifax is a beautiful little maritime city - not too big, not too small, and the people are so nice. A couple of colleagues drove me around the city and down to Peggy's Cove, one of the most photographed spots in Canada. The views at sunset are stunning, and a cloudy day adds to the surreal ambience. The first photo was taken around 7PM and the second around 8PM just around sunset.

Although I left from the old Bangalore airport, the new one had opened the day before I landed. The new airport is much more spacious and well designed, with sufficient baggage belts, gates and other connecting infrastructure. The baggage distribution was a mess the day I arrived, but I hear that has been resolved. I personally feel that people's complaining about the distance to the new airport and total time involved are quite short sighted. At rush hour, it used to take me 45-60 minutes to get to the old airport from my office located 5-6 km away on airport road. The new airport takes 90 minutes, and provides a far superior and stress free experience. The airport shuttle is frequent, flexible and practical at Rs. 20o, and should alleviate most concerns for those on a budget trip. I see this as a huge step forward by the government towards building better infrastructure for the city. But the best part about the new airport move as far as we are concerned? Peace and quiet. Our apartment is close to the old airport, and it's been a great relief to be spared at last.

Other good news! SaturdayPost, the community paper promoted by my father is now 15 editions old, and has been receiving fantastic feedback from the readers. As word has started to get around, ads have started to pour in and we are planning on expanding further to other locations in Chennai.

I've been mostly oblivious to pretty much everything else going on around me, and have just been catching up. U.S. Elections. Karnataka Elections. French Open. Yves St Laurent. IPL. Federer's resurgence (fingers crossed). Earthquakes in China. Indiana Jones. Olympics. Tata buying Jaguar (How cool is that? Beats the Mittal acquisition on my list).