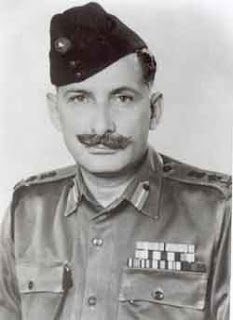 In Memoriam: Field Marshal Sam "Bahadur" Manekshaw
(3rd April 1914 - 27th June 2008)
The stories of Sam Bahadur's life have always inspired me. His exploits in WWII fighting in Burma despite his stomach having been ripped by Japanese gunfire. The India-China in 1961 where he reinvigorated the troops and pushed back the Chinese offense. And the well known anecdotes from the victory in the India-Pak war of 1971. But more than his military triumphs, his style of leadership was remarkable. While he had his quirks and eccentricities, he was hands-on and led by example even when he was the commander, which is unique in the Indian military context. His personal charisma and easy manner made him immensely popular with the jawans.
"Any one who says he knows no fear, is either lying, or a Gurkha!" - Sam Manekshaw