Who is Alex Goggins 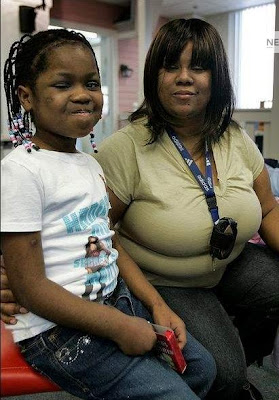 Alex Goggins is a seven year old girl who was shot seven times in trying to defend her mother (also in picture).

"Alexis' mother, Seliethia Parker, was being threatened at gunpoint on Dec. 2 by a former boyfriend in a sport utility vehicle when her daughter jumped into her arms, police said. Bullets struck Alexis' right eye, chin and jaw. She now is blind in that eye and had several surgeries before her release."

She has lost her right eye and is still recovering from the multiple surgeries she has had to go through.

It surprises me that we havent heard too much about her story in the news.