Monami on cover of Cosmo! 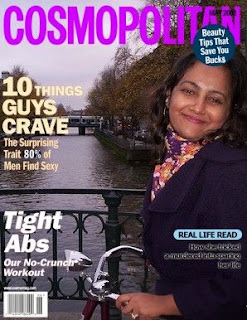 Monami is on the cover of Cosmopolitan!!!

As a clever reader of my blog, there's no fooling you, and you've likely already guessed this was just a gag :-) We found this site called Magmypic.com off Prasan's blog and have been having a bit of fun.

Here are a few funny samples - Me at the Kremlin, on the cover of Life. Monami on Cosmo (with the web sites watermark restored to the bottom right corner), and Rini on Vogue. 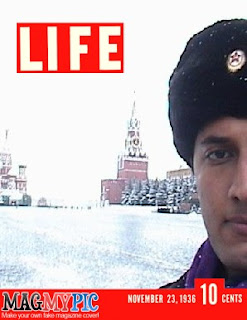 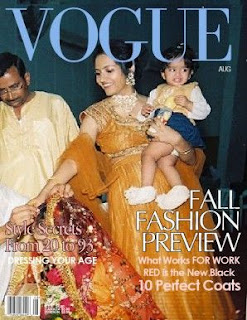 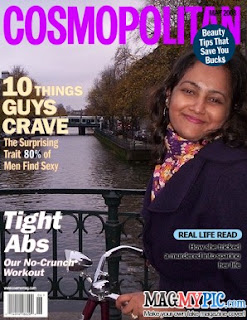 Health-wise, I havent been doing too well lately. I fell sick in Brussels for a whole week with a wierd viral fever which left me completely drained and a few kilos less (hmm, guess its not a bad thing then). The Belgian doctor was great, but somehow his antibiotics didnt do the job. I got back to Chennai to spend the holidays with Monami & family, during which we visited another doctor and went through another round of antibiotics, which at the end of the day has left me with a weak stomach and immunity. I'll need to be careful over the next month to ensure I get back to being fighting fit.

I found an interesting blog off SepaiMutiny that I've started following. Dr Khandelwal is an Indian psychiatrist who is posted in the Maitri station in Antartica. Did you know that India has had a base there since 1989, and expeditions since 1981? He is doing research on how the stress of the expedition is impacting the psychological health and cognitive functioning of the team. 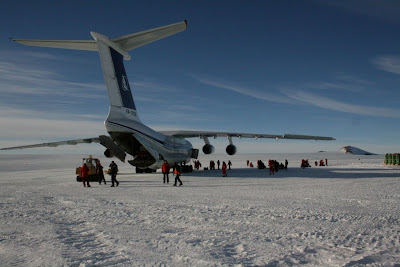 He has posted more interesting pictures like the one above off his blog here, as well as several interesting ancecotes about everything from how to survive with minimum water to a visit to a Russian station where the team leader there talks about challenges managing the people dynamics in the gruelling conditions.

I think its wonderful to learn from the varied experiences of people, and Dr Khandelwal's posts offer a uniquely Indian perspective into life in Antartica described in a simple unassuming style.

Another fine blog is Sanjeev Himachali's. It's perhaps the best blog I've read so far by an Indian HR person, with several insights on human relationship management which are relevant to the Indian context. One post I found touching was his story of how he overcame his early career challenges. As Sanjeev says, 'At the end, I only like to say that, "It is easy to give-up but it is very difficult to continue"'.

We picked up a pirated internet print DVD (Rs 50) off CMH Road and watched Taare zameen par, the recent movie made by Aamir Khan about the challenges faced by a child having dyslexia. I felt the movie was respite from the usual Bollywood masala mix, and was very moving. Aamir, who dominates most of the second half, slightly oversimplified dyslexia. But then, it would have been hard for the movie to fly with a broader audience without that.

My dad is planning to start-up a new free circulation community newspaper in south Chennai. We have registered a new company, and expect to launch the paper soon.

And in time to blow my blues away, the Australian Open starts tomorrow!

P.S: Please let me know what you think about Dr Khandelwal and Sanjeev's blogs.