We just celebrated our anniversary with a relaxing few days at the lovely Victor Exotica resort in Goa, spending endless lazing around in the pool, reading a few books, watching the Oz Open, and walking down the beach.

We had some challenges initially getting our reservations done through Footlooseyatra, who were asking for an additional 2% and also accidentally had booked us to Ooty instead of Goa :-) I instead called Victor Exotica directly to make the booking. They were very helpful, and gave us a pool facing room (the one with the balcony on the right in the picture). Needless to say, I spent a lot of time in the pool, and my back is burnt charcoal. 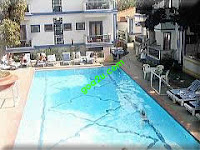 I last stayed at Victor about 2-3 years back when my buddy Laurent had visited me from the States, and we travelled up the coast from Allepey. Amazingly enough, the prices and service at the resort havent changed much despite the drastic differences you see across the rest of North Goa. I would very highly recommend the place for anyone planning a relaxing weekend trip since their package with food included is quite reasonable in comparison to other resorts. They have no internet access (period. forget wireless), which I was quite happy to forego and stay disconnected from the wired world for a bit (although my crackberry craving got the better of me eventually).

I also got started with reading former President Abdul Kalam's autobiography, "Wings of Fire". It's been fascinating so far, and I'll write back once I'm done reading. Incidentally, Kalam has been teaching at my alma PSG Tech as a visitor professor.

And finally, I watched somewhat ruefully as my prediction that Djokovic will beat Federer at the Ozzie Open came true. It's a breath of fresh air to see players like Tsonga and Djokovic. I loved Tsonga and his attacking game - it's like watching the Brazilians play soccerFor a moment in the fourth set, I though Tsonga may have pushed Djokovic around the court a bit more, taking advantage of his mobility challenges, and have gotten his nose ahead. While that didnt happen, both of them emerged as champions today.

It should be interesting see how Roger responds to the new challengers. To me, he'll need to focus on three things over the next few years: