I just got back from a 2 day business trip to China to finalize an agreement with a new customer. I was quite blown away by how China has built Shanghai into a world class city that showcases their economic growth and manufacturing muscle. Even within China, Shanghai beckons and inspires – the home to all things new, in technology, fashion, commerce, and the arts. Ten years back, the Pudong district of Shanghai was just another fishing village by the delta of the Yangtze River. Today, the new age skyline rivals the greatest cities of the world. Hell, I thought it was out of Jetsons or Blade Runner.

If you were to ask me, I liked Shanghai more than Tokyo, Singapore and Hong Kong. While real estate is prohibitive, most other things are fairly reasonable – transport, food, utilities, clothing for instance. I stayed in $100/night hotel room that was better than what you can get in Bangalore for $200/night. 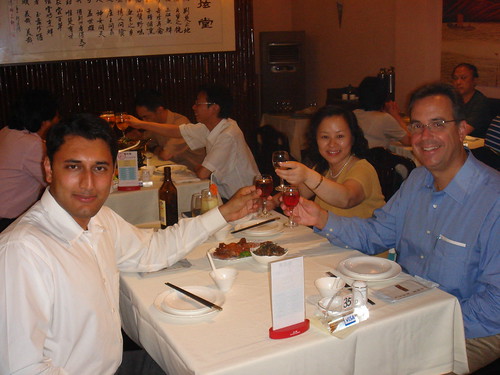 Picture: Dinner with Weiwei, our new sales director for China, and Peter, who is leading our global partners strategy.

My first ‘rationalization’ was that Shanghai was the only Chinese city that was this well developed, but as I learnt more, I found that China now has over 41,000 kilometers of 6-lane expressways, second only to the United States. The government has invested significantly in infrastructure as a key enabled to success in manufacturing, which requires sophisticated transport logistics and communication setup.

How long will it take before Bangalore, India’s IT capital and technology center becomes a Shanghai? Probably a really, really long time. But, does it matter? One well known argument is that our existing lowest common denominator democracy which thrives on ‘theoretical principles’ and seeks to satisfy every end of the voter bank spectrum is just not right for India. The flip side is that we are still evolving as a democracy, and are headed towards a more sustainable model. And that we need to focus development in urban union territories like Delhi and Pondicherry where the cabinet wouldn’t need to be worried about getting voted out by the farmer contingent. The growth in the NCR region of Delhi, Noida and Gurgaon is an example.

Since I was in meetings or conf calls pretty much since the moment I woke up till I hit the sack, I didnt get a whole lot of time to get around the city outside of the view during commutes and during dinner outings. While waiting for my flight back, I did some quick shopping and picked up some Oolong tea, Chinese wine, Chinese candy (chewy stuff), and chocolates. Give me a shout if you want to sample some ;-)